BCV5™ - Fast Database, Tablespace Refresh and Clone, with in-flight Data Masking / Anonymizing capability. Unmatched speed and automation for mainframe Db2 environments..
Fast refresh and/or cloning  of Db2® for z/OS® databases, tablespaces, or tables is what BCV5 does better than others. Smart analysis and handling of structure, DDL, OBID, etc ease the copy/migrate task. Save an average of 90 percent in CPU and wall clock time for your Db2 copy or migrate jobs when compared to various Unload/Load or Db2 cloning tools. The BCV6 option for non-stop environments and options for enhanced Data Anonymization / Data Masking are available. In other words, fast automated Test Data Management and rapid test environment provisioning.

Compared to other Db2 utilities, BCV5 is the choice when productivity, speed and minimal disruption are of key importance.


Corporations maintain large amounts of data in Db2 databases and it is normal to find several Db2 subsystems for production, test and development. Refreshing testbeds from production systems is a vital part of the development, testing and quality assurance life cycle. Obtaining relevant, production-like test data requires copying from one Db2 subsystem to another. The window of opportunity for copying or migrating Db2 data is constantly decreasing as the demands from 24 x 7 operations increase. Limited resources and shrinking batch windows make data delivery to Test and QA difficult. 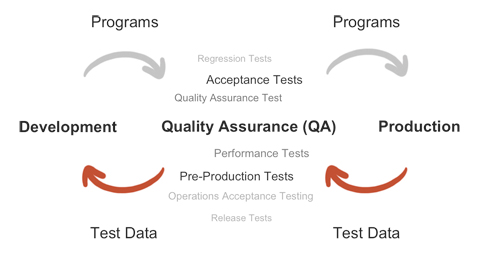 BCV5 to the Rescue
BCV5 copies, refreshes and replicates Db2 objects quickly and efficiently. In record time, BCV5 copies Db2 tablespaces and indexes between different Db2 subsystems, or within the same subsystem. It comes with a built-in copy tool that works directly on VSAM level or image copies and is many times faster than UNLOAD/LOAD. When measured against conventional copying methods, BCV5 saves on average 90% on elapsed copy time as well as in machine CPU and I/O consumption. One customer cut their copy process time down from ten hours to 45 minutes by switching from UNLOAD/LOAD to the BCV5. Another from several days to less a few hours.

The intelligent automation of BCV5 not only copies the physical Db2 data fast, it also takes care of all the structures. This includes all the basic objects – your databases, tablespaces, tables and indexes – and also DDL features such as views, triggers, aliases, synonyms, constraints, and many more. It frees DBA and data provisioning staff from all of the busy, tedious work and "baby sitting" thus allowing them to focus on mission critical tasks.

DBAs are no longer forced to wait for weekend time slots and are able to run copy jobs on regular weekday shifts. With BCV5, test data on demand is now a dream come true for QA, development and test staff. A big productivity win for the organization as end users get their data delivered quicker than ever before!

Enhanced Data Masking of Sensitive Information, PII
The BCV5 Masking Tool option let you implement your masking strategy in a consistent, reliable and secure manner. It delivers dozens of masking algorithms in the form of Db2 user defined functions that are ready to use right out of the box. These functions can generate artificial, but seemingly real data, such as names, addresses, credit card numbers, social security numbers, and more that you can use or extend. Data Masking can be done in-place or as part of the copy/refresh process The BCV5 Masking Tool also comes with several pre-defined lookup tables that contain thousands of names and millions of addresses in different languages. For more information see the BCV5 Masking Tool brochure.

Flexible Selection of Image Copies
BCV5 allows you to copy from either image copies or from current tablespaces (local disk or via TCP/IP). You can use the most recent image copy, or an older image copy chosen by generation number, timestamp, or dataset name pattern. BCV5 automatically identifies the correct image copy datasets and uses them in the copy process. It also detects if your indexes have image copies or not, and only rebuilds the target indexes if it cannot copy them directly.

How can BCV5 save on CPU Resources and MLC?
Row-wise processing consumes many more CPU cycles than VSAM copying. Clients report that BCV5 only uses about one-tenth of the service units that UNLOAD/LOAD based processes typically use. BCV5 copies data directly from the source pageset to the target pageset. This also works if the source and target are located on two different LPARs or even two different CECs since BCV5 gives you the option to copy data over a network connection. In addition, BCV5 also copies indexes directly, instead of rebuilding them each time, like the LOAD utility does.

RUNSTATS Cost Time and Money
Db2 requires valid RUNSTATS information to find efficient access paths, and real time statistics (RTS) to calculate the sizes of sort work data sets. BCV5 copies these statistics directly from the source environment into the target. There is no need for a separate RUNSTATS job or to do a REORG in order to collect an RTS baseline.

Why is BCV5 so fast?
BCV5 owes its unmatched performance to its proprietary Db2 copying tool. While the UNLOAD/LOAD utilities slowly extract single rows one at a time, BCV5 copies the complete VSAM linear data sets to the target and replaces the Db2-internal OBIDs with the correct target values. BCV5 also uses parallel processing and automatic workload balancing to boost the overall copy speed. The built-in copy tool of BCV5 also copies LOB and XML data at the same rate as regular tablespaces. This all adds up to make BCV5 ten times faster than UNLOAD/LOAD.

Making the Copy Process Easy
A fast and efficient copy tool is only part of the solution, however. The BCV5 user interface is intuitive and makes it easy to set up copy processes, whether you are a seasoned DBA, an application developer, or a member of QA and testing. Those who prefer the PC environment can use BCV5’s graphical user interface. And, of course, on-line help is always one click away.

Who needs BCV5?
Anyone involved in budgeting, surely appreciates cost savings. BCV5 allows you to do more with your existing hardware, thus avoiding expensive machine upgrades and the associated increase in software cost. It can also help you lower your four-hour rolling average, which often peaks during long running LOAD jobs.
Application development teams, QA groups, technical support staff, auditors and, of course, end users need more timely delivery data in order to do their jobs and become more agile. Being able to get current test data quicker and on-demand improves the quality of your Test and QA processes. This is something that benefits your entire organization.
BCV5 relieves the DBAs from the time-consuming burden of refreshing test and development environments since it provides an unmatched degree of automation. This allows them to focus on the mission critical tasks in your production environment.

BCV5 is a faster, more efficient and manageable way to copy Db2 data. It intelligently generates and executes jobs so Test and QA get data in record time. Get the productivity of a "push button" process for ad-hoc or scheduler driven refreshes of data and environments. BCV5 makes data provisioning a simple and repeatable task. Best of all, it goes from start to finish in minutes instead of days.

Contact us to schedule a Q&A, Demo, or free trial.

Customer satisfaction is our goal. Listening to our customers has led to improvements in our products and increased customer loyalty with personal, responsive support.  In these days of impersonal mega-vendors, we strive to provide constantly enhanced products that meet new technological advances and help our customers meet their technology goals.

"ESAI support is the best I have experienced in my 37+ years in IT... They take great pride in their products and it shows."

“We brought in BCV5 and a competing product for evaluation. We took our time and installed BCV5. It took 45 minutes. With a few hours of testing and a few answers from support, we were able to complete our 1st refresh on day 1. It took less time to install, configure and execute a refresh with BCV5 than it took to get the competing product installed.”